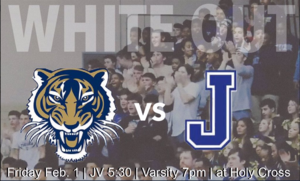 Coming off of their eighth straight win, our basketball tigers are gearing up for a big district game tonight against Jesuit here at the Holy Cross Student Center. Come out and support our Tigers!

Our varsity basketball tigers won their eighth straight game earlier this week when they defeated the Brother Martin Crusaders 56-54.

The game was played at Brother Martin and was celebrated by the Crusaders as a Cor Jesu “Throwback” game to honor the 50th anniversary of becoming Brother Martin and winning the 1970 State Championship. However, the Tigers ruined the flashback as they rallied to victory in the second half of the game.  The Crusader team even wore “throwback” Cor Jesu uniforms, but the Tigers came alive in the third quarter with a 12-point run. Kalil Thomas had the hot hand scoring twenty-four points.

“This team is special, man,” Thomas said after the game. “Every day in practice, we go hard.”

Coach Kirkwood spoke about his team by saying, “They’re going to fight and they’re staying with the mission…. I’m proud of my guys.”

This win completed a season sweep of the Crusaders by the Tigers, who beat Brother Martin 59-49 at home back in January.  Be sure to attend Friday night’s game at Holy Cross when they take on the Jesuit Blue Jays.