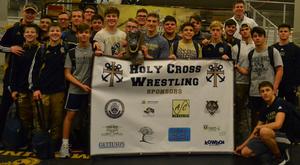 Congratulations to our Holy Cross Wrestling Team for being named the 2018 Deep South Bayou Dual Tournament Champions.
This past Saturday, at the Lamar Dixon Expo Center in Gonzales, Holy Cross Wrestlers met up with Jefferson High School out of Georgia to battle for the Gator Head trophy in the Finals of the 2018 Deep South Bayou Duals Tournament.  The Dragons have won Georgia State Championships every year since 2001. With ten state placers in 2018, their team was a formidable opponent for the Tigers.
Coaches Nick Michael, Landon Williams and Cole Clement gathered the team before the first whistle blew. The message was clear: "SCORE POINTS. Wrestle in every position. PUSH THE PACE." The Tigers had dominated every round in the two-day tournament to get to the finals, and this was an opportunity to take another step toward the ultimate goal of winning State in February. The Tigers showed true grit and determination and claimed the Gator Head trophy by defeating Jefferson 31-27.