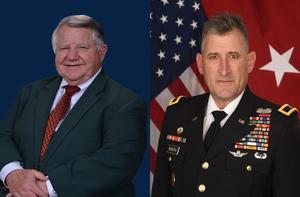 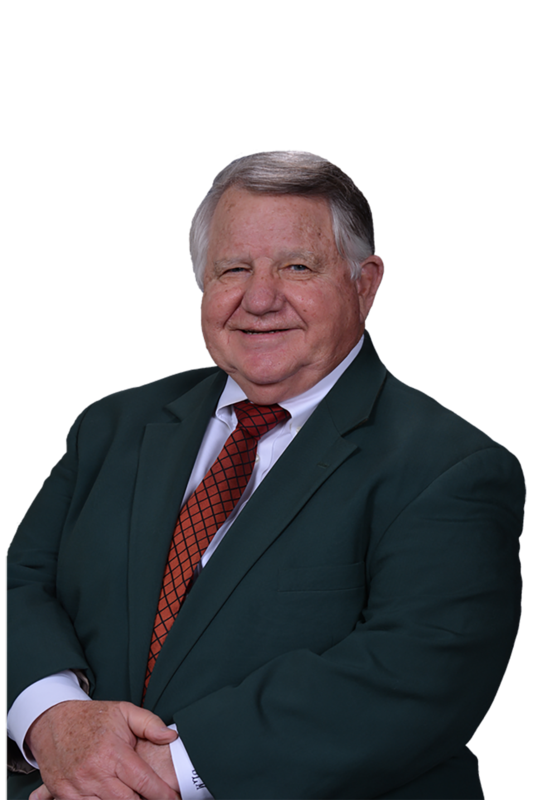 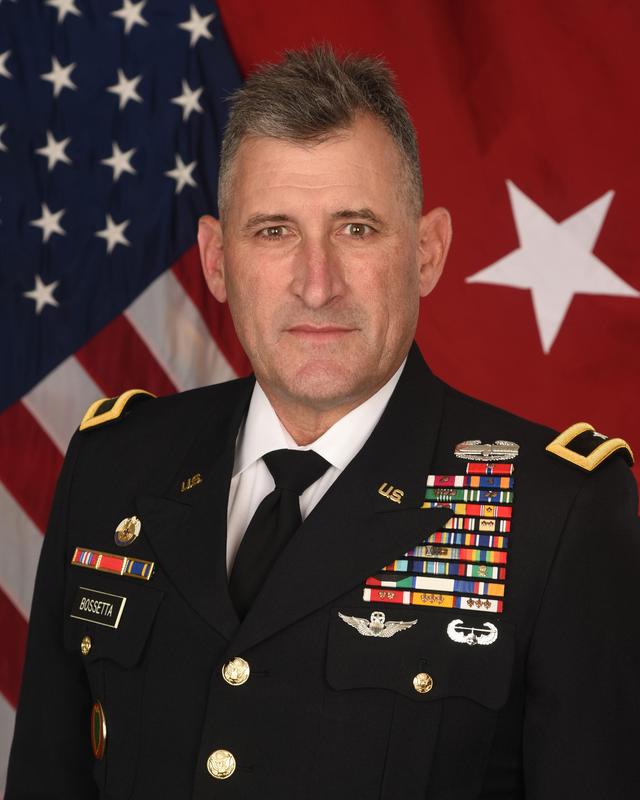 Holy Cross will honor two outstanding alumni immediately before kick-off at the Rivalry game versus Jesuit on Friday. Congratulations to David "Buck" Landry, Class of 1961, who is our 2018 Legend of the Game, and Brigadier General Patrick R. Bossetta, Class of 1978, who is our 2018 Military Honoree.

The Holy Cross 2018 Legend of the Game is Dr. David 'Buck’ Landry ’61. Buck played in the rivalry his sophomore, junior and senior years, 1958, 1959 and 1960, serving as captain in his senior year. He was on the All-State team for 1960 and is a member of the Holy Cross High School Hall of Fame. He also served on the Holy Cross wrestling team and was selected All-State for three years. Buck received a football scholarship to Tulane University where he played offensive guard in 1962, 1963 and 1964. Dr. Landry earned a Bachelor of Arts from Tulane University in New Orleans, his master’s degree from American University in Washington, D.C., and his Ph.D. with a concentration in International Affairs from the University of Notre Dame in South Bend, Ind. After receiving his master’s from American University, he served three years in the U.S. Army, attained the rank of Captain and received the Bronze Star while serving in Vietnam.

Patrick Robert Bossetta, U.S. ARMY, Brigadier General (Retired) Patrick R. Bossetta is a member of the Holy Cross Class of 1978. After graduating from Holy Cross, he attended Louisiana State University where he received a Bachelor of Science in Accounting in 1982. He then attended graduate school at LSU and received a Master of Science in Taxation, graduating Summa Cum Laude in 1983. He also passed the Certified Public Accountant (CPA) Exam. He then attended Loyola University of the South and graduated from Law School in May of 1986 and was then admitted to the Louisiana Bar Association. He also received a Master of Science in Strategic Studies from the Army War College, graduating in 2012.

GENERAL BOSSETTA’S CAREER AT HC AS A STUDENT & ATHLETE

Continuing a long family tradition that spanned decades and generations, Patrick entered the Holy Cross Family in 1974. Patrick applied himself academically to qualify as a member of the National Honor Society, graduating from Holy Cross with honors. During his junior and senior years, he was chosen to serve in the student government as well as several committees. As an athlete, Patrick played both Junior Varsity and Varsity Football, becoming a starter and two-year letterman. Patrick also played golf for the Tigers for four years, was a four-year letterman and was named Captain of the team. He also qualified for the state tournament. Patrick continued his football career at Louisiana State University.

CALL TO SERVICE TO THE COUNTRY & MILITARY CAREER BECKONS

After graduating from Loyola’s Law School and practicing as a tax attorney in New Orleans, Bossetta answered a call to duty and joined the United States Army in 1987, becoming an Army Officer and Aviator. He continued his career as an Army Officer and Aviator for more than three decades, serving in multiple combat tours as well as National emergencies to include Hurricanes Katrina, Rita and the Deep Horizons Oil Spill. Bossetta commanded throughout various levels of the Army, from a Platoon Leader with the 1-24 Infantry Division during Desert Storm to commanding brigade as well as battalion and task force sized formations in combat tours including TF Voodoo, an Assault Helicopter Task Force. He flew hundreds of combat missions logging more than 1,000 hours of combat flying time throughout his military career.After serving at those levels of command, he was promoted to his current rank, which he attributes and credits “to the efforts of the amazing officers, aviators, crew chiefs, NCOs and soldiers I have been privileged and honored to have served with. They made me; I certainly did not make them.”

BG Bossetta was born and raised in New Orleans and has been married to his wife Marlene Hand Bossetta for more than thirty years. They have three children: Alexandra Michelle Bossetta, who graduated from LSU and George Washington University and now works in Austin, Texas; Catherine Elizabeth Bossetta, who graduated from Northwestern State University and currently works at Baton Rouge General Hospital awaiting graduate school; and Patrick Joseph Bossetta, who attends Southeastern Louisiana University majoring in business where he is a member of the Lion’s Basketball team. Patrick’s father, Judge Joseph R. Bossetta, was a Holy Cross graduate who served as a Marine in the Pacific in WWII and upon return, became the Floor Leader of the Louisiana Legislature where he was critically instrumental in the founding of LSUNO and SUNO. BG Bossetta’s brother Michael was a teacher at Holy Cross and served as the school’s Disciplinarian. Patrick’s younger brother Brian, a 1984 graduate, was as an outstanding All-District football and track star who played collegiately at Georgia and Ole Miss. BG Bossetta served as the attorney for the New Orleans Police Department as well as having a robust private practice. Today, Patrick maintains an office in New Orleans and concentrates on commercial real estate developments.

REFLECTIONS ON THE HOLY CROSS EXPERIENCE

“My mother wanted me to go to Jesuit so my father took me to see Jesuit. Unbelievably enough, the Blue Jay Marine Corps JROTC was in full dress rehearsal in the courtyard marching and playing the Marine Corps Hymn. As my father was standing at attention and saluting I figured I was going to be a Blue Jay. But he let me make my own decision and my heart was always with and has been at Holy Cross. It is an institution I hold most dear and it laid the foundation of becoming a Holy Cross Man. I learned so much about who I was and who I needed to become. I remember the great teammates I had, and I sincerely appreciate the guidance by my teachers and coaches, especially Coach Rowan and Coach Johnson. They all helped me become the man I am today in ways they probably do not know. I loved the brothers, especially Brother Robert, Brother Daniel and Brother Melchior. I had really excellent teachers and great role models who prepared me for success in life

“Playing the undefeated and eventual 5A State Champion St. Augustine Purple Knights in the rain at Tad Gormley Stadium. As I tackled a St. Aug player and we slid out of bounds, there was my little brother standing over us yelling “Holy Cross, Holy Cross!”We did not win that very close game, but the respect we earned that day from our opponent and more importantly for ourselves, has always stuck with me. When I arrived at LSU, the St. Aug players on the team as well as Coach Otis Washington asked if I played in and remembered that great “Game in the Mud.”

Both honorees will be presented with their awards at 7:08 p.m. on the field at Tad Gormley Stadium.