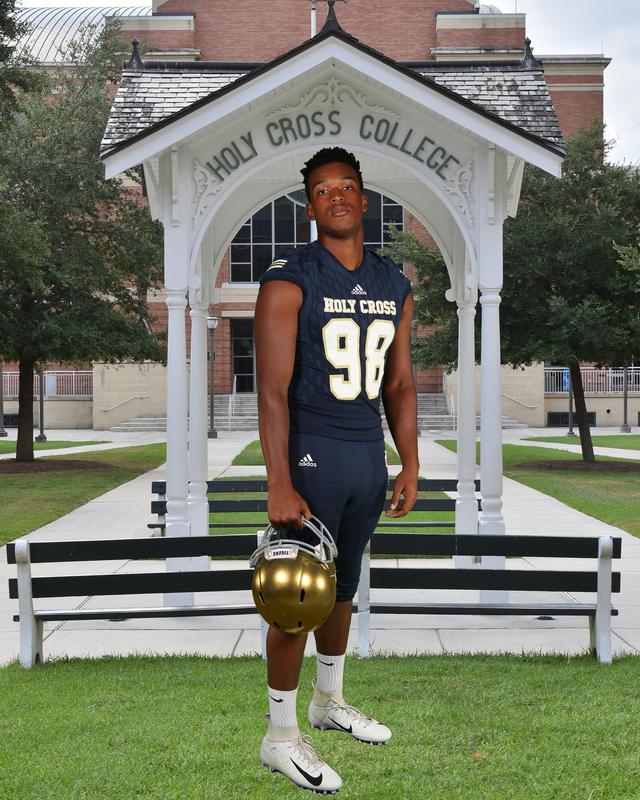 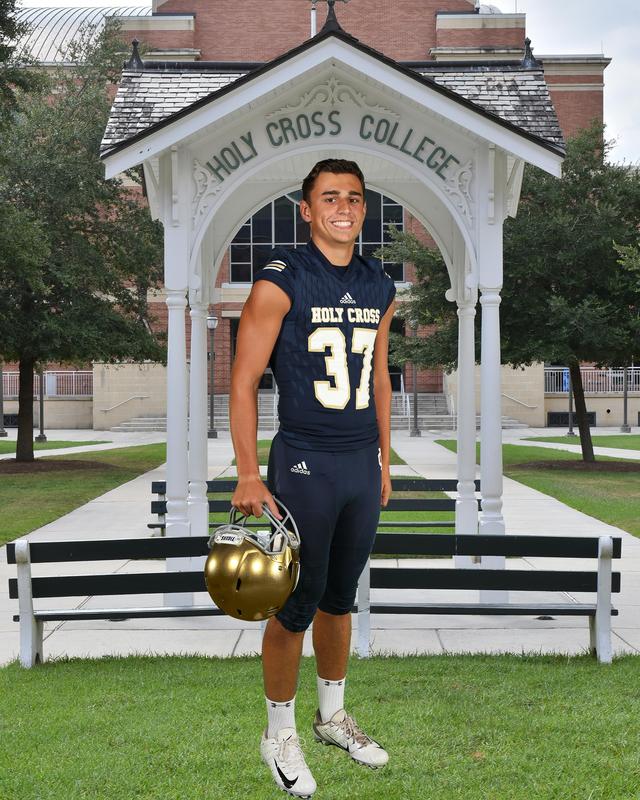 A traditional feature of the Great American Rivalry is the recognition of a senior letterman on each team for his academic achievement. The Holy Cross 2018 Scholar-Athlete is Elias Brown with a weighted GPA of 5.28.  Elias is a three-year letterman, assisting his Tigers as a Defensive End and Captain. He serves the Holy Cross community as this year’s Senior-Class President and guiding his younger peers in the Big Brother program. Elias is a member of the National Honor Society, as well a student of Holy Cross’ Brother James McDonnell Scholars Program.

Elias spends his time outside of school mentoring and inspiring young, black males to strive towards excellence and accept Christ. He has participated in community service by giving more than 72 hours of service in providing for the homeless at Ozanam Inn and his local church. He plans on attending Howard University to pursue a medical degree.

He is the son of Elvin and Inga Brown. Elias and Jesuit’s Scholar Athlete, Neehar Desai, will receive a $500 scholarship from The Great American Rivalry Series and Home Bank.

The Scholar-Athlete awards will be presented moments before the 7 p.m. kickoff.

The Community Service Award is presented to a senior football player from each team for his exemplary service to his community. Kicker Trevor Terminie is the Holy Cross 2018 recipient. This summer, Trevor participated in a Holy Cross leadership conference in which he participated in individual service projects. One project in particular consisted of helping at a shelter for the homeless with disabilities. He helped create sewing kits to distribute to homeless people who have issues with their clothing.

Trevor also participates in the revitalized Boys to Men Program at Holy Cross, interacting with and assisting his younger classmates. Outside of Holy Cross, Trevor works actively in a High School CYO Group at St. Philip Neri Parish in Metairie. He participates in projects ranging from food drives for the homeless to simply trimming trees and bushes around the Church. Trevor believes that these projects have molded him into a Holy Cross Man and a leader in his community.

Trevor is the son of Chad and Lesley Terminie. Trevor and Jesuit’s award recipient, Payton Hedrick, will receive a $500 scholarship from Royal Honda.

The Community Service awards will be presented immediately after the first quarter and before the start of the second quarter.