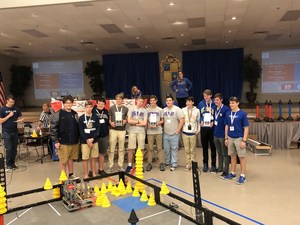 Congratulations to our robotics team, the Robotigers, who won the state championship in a tournament this past weekend!

On March 3, the Holy Cross Robotigers competed in the state championships held at St. Paul's School in Covington. There were 44 teams in attendance from throughout the state. The Robotigers won the state tournament and have advanced to the World's competition being held the last week in April in Louisville, KY.  Worlds is a four-day competition where 560 qualifying teams from across the world will compete for top honors.

VEX Robotics is the leading provider of educational and competitive robotics products to schools, universities, and robotics teams around the world. VEX Robotics has more than 16,000 competitive teams in more than 40 countries with more than one million student participants. Each year VEX challenges students to develop a robot capable of achieving a series of tasks and then have those students compete against each other to determine who developed, not only the best robot, but the best game strategy as well.

A game is played between two "alliances" of two robots that are randomly paired and must outscore their competition.  While the game, played in a 12' by 12' field, is intended to be offensive in nature, a defensive strategy may be necessary.  Points are awarded based on the placement of game pieces during a 15 second autonomous period and a 75 second driver-controlled period.

Congratulations to our Holy Cross Robotigers!