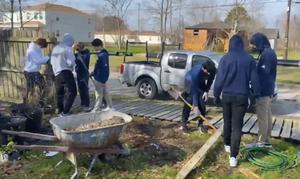 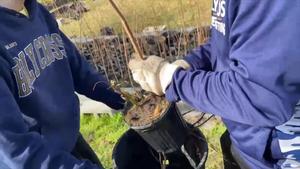 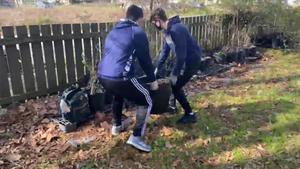 On February 8th, junior theology classes traveled to Common Ground Relief as part of their service project on stewardship. To prepare, students read and discussed key passages from Pope Francis’ 2015 social encyclical, Laudato Si, and investigated the role of marsh grasses and wetlands in protecting our community and culture.

Joshua Atkins and Evan Frost describe their work, “when we arrived, we were immediately greeted by Ms. Caroline who gathered everyone together and explained the goal that we were to complete that day. First, we started working on planting tree saplings. We would make sure that the plant was still alive, then if it were, we would clean out the pot, remove the plant, and put more dirt into the pot to ensure that the plant has as much room to grow as possible. However, if the plant was dead, then we would just remove the tree and put it into the waste pile and reuse the dirt. The whole time our group was working very efficiently, so much so that we replanted 220 trees that would grow and get reposited into the marshes and coastline.”

Renzo Cantin reflects on the moral significance of the service, “having a healthy environment directly corelates to having a healthy life, economy, and wellbeing. If our wetlands are gone, then all of the homes and local businesses will be destroyed, which will ultimately destroy our wellbeing and economy. So, it is important to make sure we have those natural defense barriers for future generations to come. By doing the service work we did we were able to live out our call to justice and charity.”

The students were accompanied by faculty members Rachel Kass, Sasha Kreinik, Oliver Ranner, David Westfall, and Adrian Jackson. Mrs. Kreinik stated, “Very rarely are we gifted with the opportunity to make a tangible difference in a short amount of time. This day with the juniors was one of those gifts. We spent the day hauling, weeding, planting, and mending, and each and every one of us was able to stand back at the end of it and say “look what we accomplished, we did some good for our community and for our city.” Life almost never works out like that, but every once in a while, we can take a small action that will have a huge benefit far beyond our own corner of the planet. If what we did Monday can help in the fight to mitigate the land loss we are experiencing here by readying trees for planting and mending a few picket fences on a sunny afternoon, that shows us that just a few determined people getting together to help can probably fix anything, anywhere. That’s the broader lesson that our guys learned on Monday. It was also a lot of fun. I am thrilled I was invited.”

The project was funded by a grant from the Joe W. and Dorothy Dorsett Brown Foundation.