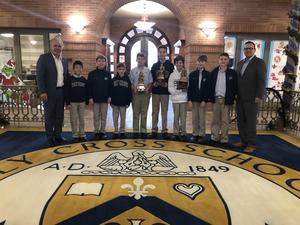 Congratulations to our Academic Games teams, who took honors in the Propaganda and Equations tournaments.

It’s a first semester sweep for Holy Cross in the 7th and 8th grade division of the New Orleans Academic Games League. The team of Christian Smith, Tyler Tran and Luke Suggs took first place in both the Propaganda tournament and the Equations tournament. They were recently awarded the traveling Thinker trophies to bring home to Holy Cross for their outstanding efforts. Both Tyler and Luke also received medals for their individual top ten placements in Propaganda and Presidents.

The Holy Cross 5th and 6th grade team was also recognized for their third place finishes in both tournaments. Team members are Hiep Doung, Noah Olivio, Jude Feaheny, Blake Bigner, and Peter Schissel. Both Peter and Blake also placed in the top ten as individuals for Propaganda.

The teams will compete in two more tournaments second semester and those students who score well enough individually in all four tournaments will be invited to the National Tournament in April being held in Atlanta.