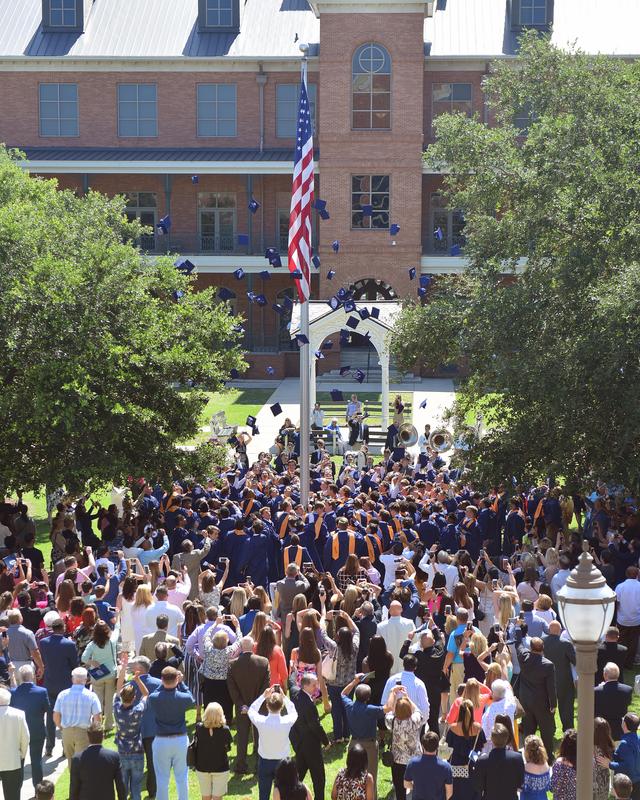 The Holy Cross School Class of 2019 celebrated its Baccalaureate Mass and Commencement with 144 students receiving diplomas on Saturday, May 25, 2019.

Together, the class earned $15,017,773 in college scholarships and received admission offers from 108 universities throughout the United States, including military appointments to the U.S. Military Academy and the U.S. Naval Academy.

Martin, son of Jenna and Sean Martin, will attend Louisiana State University, where he will be a member of the Honors College and plans to major in biochemistry and physics. At Holy Cross, Martin served as Student Body President and was the recipient of the Silver Medallion Award for Excellence in Science and the Silver Medallion Award for the Athlete with the Highest Average.

Wellington, son of Frances and Charles Wellington, will attend Tulane University. At Holy Cross, Wellington was the recipient of the Silver Medallion Award for the Athlete with the Highest Average.

Ziegler, son of Rebecca and Melvin Ziegler, will attend the University of Notre Dame, where he plans to major in political science and philosophy. At Holy Cross, Ziegler was the recipient of the Silver Medallion Awards for Excellence in Debating, English, Foreign Language and Musicianship and was a graduate of the Brother James McDonnell, C.S.C. Scholars Program.

Brown, son of Inga and Elvin Brown, will attend the United States Military Academy, where he plans to major in pre-medicine. At Holy Cross, Brown was the recipient of the Silver Medallion Award for Class Salutatorian, served as Senior Class President, and was a graduate of the Brother James McDonnell, C.S.C. Scholars Program.

Montalbano, son of Pamela and Samuel Montalbano, will attend Louisiana State University, where he plans to major in mechanical engineering. At Holy Cross, Montalbano was the recipient of the Silver Medallion Award for Class Salutatorian.

The event marked the 170th commencement of Holy Cross School, which was founded in 1849. During the event, the school awarded an honorary diploma to the late Wendell Aldrich, who attended Holy Cross in the 1920s but did not graduate because he quit school to work and support his family when both of his parents died. An honorary diploma was also awarded to senior class moderator Raymond Charboneau, who has taught at Holy Cross for more than 30 years. Charboneau also gave the faculty keynote address. Members of the Class of 1969 who attended also received a commemorative 50-year "Golden" diploma.

Graduates of the Holy Cross School Class of 2019 are: