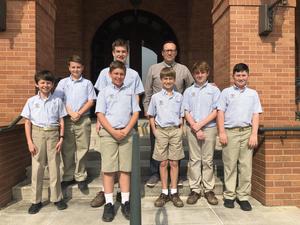 Congratulations to our Academic Games Team members who are heading to the National Tournament in Orlando next week.

In only its second year, Holy Cross School’s Academic Games Team has flourished and has become a force to be reckoned with in the New Orleans area. This year, seven of our students (Tyler Tran, Peter Schissel, Blake Bigner, Carson Terminie, Chase Viellion, Christian Smith, and Wyatt Bigner) will represent Holy Cross at the Academic Games League of America’s National Tournament in Orlando, Florida.